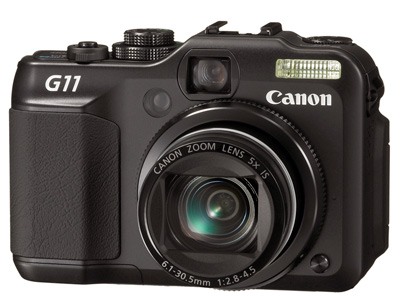 Pre-IFA 2009: Canon has announced a handful of compact cameras including models aimed squarely at keen photographers. Top of the line is the PowerShot G11, successor to its flagship PowerShot G10 compact released last year. The G11 replaces the G10's 14.7MP sensor with what it describes as a high sensitivity 10 MP CCD though it still uses the same 28-140mm equivalent stabilized lens. The camera also gains a tilt and swivel LCD, though the size drops to 2.8 inches. Flash sync speed increases to 1/2000th of a second and HDMI output is also added. Other features include Dual Anti-Noise System (more sensitive sensor and Digic 4 offering a claimed 2-stop improvement over the G10), RAW shooting and P/A/S/M shooting modes.

London, UK 19th August 2009: Canon today announces the launch of the feature packed PowerShot G11, the successor to the multi award-winning PowerShot G10 - the favourite compact of professional photographers and photoagencies the world over.

To achieve this I need a camera that offers great image and build quality without the bulk, and the PowerShot G series is perfect for this purpose. When shooting in areas of conflict, it’s important to have a compact camera in my bag that allows me to work discreetly but also provides the level of quality required to get the photos I need. The G Series excels in this respect, delivering great quality images from a compact body that is less intimidating than that of an SLR.”

The premium quality Canon lens delivers picture-perfect performance, offering a 5x wide angle (28mm) zoom with optical Image Stabilizer (IS). This allows handheld shots to be taken at much slower shutter speeds (4-stops) than conventional non-IS models - allowing perfect shooting in darker conditions or at a lower ISO.  Greatly reducing blur caused by camera shake, photographers can shoot at longer focal lengths and in lower light conditions without the need for a tripod.

The digital compact includes the ability to shoot in RAW format and is compatible with Canon’s Digital Photo Professional (DPP) software, ensuring that photo shoots can be easily integrated into a photographer’s workflow.

Stephen Munday, Senior Operations Director, Editorial, Getty Images, comments:  "The quality of images delivered by the PowerShot G series are so good that we use G10 images within our editorial library, and our photographers using the G series models do so because of the image quality and flexibility they provide.”

He continues, “The unpredictable nature of news photojournalism requires our photographers to get shots in all kinds of situations, and the size of the G10 allows them to do that without drawing too much attention to themselves. The low-light capabilities of the new G11 will be of even greater help in that respect, as it will allow our photographers to shoot high quality images without flash in even more situations."

Alongside superb image quality, the compact size of the PowerShot G11 and a 2.8-inch vari-angle PureColor II VA LCD (461k dots) make it the ideal choice for professional photographers to use where an SLR is impractical or obtrusive.   The G11 is ergonomically designed for faster, accurate menu scrolling.  Analogue style dials for ISO and exposure compensation give photographers instant, familiar access to common settings and features.

“I’ve been a user of the G series since the G5” says Edmond Terakopian, photojournalist and winner of the British Press Awards Photographer of the Year and a World Press Photo award for Spot News. “Recently I’ve been using the G10 which is absolutely spot on; image quality, usability, reliability and build quality are all excellent. It’s the one camera that’s always with me, no matter where I am; whether on or off duty. I know I can rely on it to help me get the picture, no matter what.

Over the years I’ve used my G Series cameras on the occasions when assignments have needed discretion. It’s a satisfying feeling telling a picture editor that the photograph he’s just complemented was from a compact camera.”

The G11 is equipped to deal with any light condition.  Low Light mode enables photographers to shoot up to ISO 12,800 in reduced 2.5MP resolution at 2.4fps capturing brilliant shots indoors without the need for a flash, whilst a built-in Neutral Density (ND) filter decreases light levels by 3 stops allowing creative control in bright conditions.

The PowerShot G11 can be used with a wide range of Canon accessories, including the Speedlite 270EX, 430EX II and 580EX II; Macro Twin Lite MT-24EX and Macro Ring Lite MR-14EX flashes for enhanced shooting options; the Speedlite Transmitter ST-E2, Speedlite Bracket BKT-DC1 and Remote Switch RS-60E3. Underwater photographers can even team the PowerShot G11 with the specially designed Waterproof Case WP-DC34 - an underwater housing allowing full control of the camera at depths down to 40m. The PowerShot G11 includes an HDMI port so users can review images on a full HD screen via an optional HDMI cable.