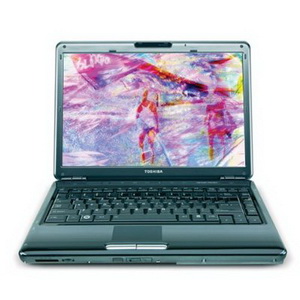 We've put several of Toshiba's latest mid-level, high-gloss Satellite notebooks through their paces around here in the past few months, and the 14.1-inch Toshiba Satellite M305 is the latest model in this familiar lineup of devices to come up for review. Dishing out sizeable helpings of memory and processing prowess in the configuration we received, the M305 is a consumer-focused laptop that potentially has the power to keep power users happy.

Wrapped in a love-it-or-hate-it glossy exterior, the M305 targets general users as well as those looking for a mobile multimedia device, with an upgraded audio system and a chic multimedia surface control arrangement. At once style-conscious and budget-conscious, the latest Satellite appears to do a lot of things right - if you can get past all that shiny plastic.

Although the rest of the NotebookReview crew was pretty high on previous Toshiba laptops with the high-gloss Fusion Finish, I was admittedly skeptical about the M305's shiny keys and super-reflective lid. If the finish is allegedly durable, in some ways it really doesn't look it.

After a few weeks with the Satellite, however, I'm feeling the need to retract this hasty pronouncement. While it's almost impossible to keep flat surfaces on the notebook free from smudges, the general consensus seems to be correct: durability definitely isn't a problem with these computers. Even an accidental run-in with a bag zipper - the kind of scraping contact that would put a deep scratch on the surface of most notebooks - didn't faze the M305's finish.

If you like the high-tech, high-profile look that it imparts, the Fusion look is svelte, modern, and very appealing. The standard array of function indicators, the M305's multimedia touch panel, and even the Satellite wordmark and touchpad surround are all illuminated with a soft glow that looks great under normal ambient light (though it can be a little bright and harsh on the eyes when working in a dark room). A shallow-inset keyboard and touchpad buttons have an equally classy, well thought-out look. A well matched grey and black striped lid just like we've seen on other recent Toshiba Satellite models rounds out the package.

If you're one of those notebook users who judges the build quality of a notebook by how much metal is visible in its construction, the M305 won't be earning many high marks in your book: this laptop is all about the plastic, with glossy (and thus, highly obvious) polymers covering nearly every inch of its surface. Again, while the slick plastic can feel a little cheap, the M305 belies this idea with a tight, solid build and lots of nice details.

Panel flex was largely nonexistent, save some give in the typical trouble spot just over the optical drive on the top deck. Similarly, I could induce just the slightest hint of screen ripple by flexing the fairly rigid lid. As with the last few Satellites we've looked at, the M305's battery doesn't seem particularly well anchored, with about an eighth of an inch of front-to-back free play.

Hinges are a touch sticky, and with their plastic coverings and dodgy alignment look like they might be a weak point down the road; without a long term test, though, it's hard to say for sure one way or another on this score. There's no latch keeping the lid anchored shut, which makes at least one reason for the Toshiba's hard-to-move hinges both obvious and appreciated. And assuming they're more durable than they look, I'll take stiff hinges to weak ones any day.

With these complaints clearly registered, the M305's generally solid construction impresses nonetheless. If it doesn't exactly show off the tank-like hull of a high-end business notebook, for a mid-level consumer laptop there's very little of consequence to complain about with the M305.

At 5.25 pounds, the 14.1-inch Satellite feels just a bit portly for its size, though this density contributes to an overall feeling of quality more than it detracts too much from the M305's portability. Measuring in just over 1.25 inches thick at its widest point, the Satellite isn't stellar in terms of overall compactness either, but it certainly lives up to expectations given its price.

At 14.1 inches, the M305's display is obviously smaller than the recently reviewed A305's 15.4-inch version, but performance could be described in almost exactly the same terms. Backlighting is even, with practically no discernible bleed, making colors pop vividly across the gamut.

As with the A305, however, while horizontal viewing angles are nice and wide before color begins to invert, there's a decided "sweet spot" on the vertical axis: swallow out your vertical angle too much and the screen quickly begins to lose all semblance of contrast. Moving in the other direction, color invert relatively quickly. This combined with the fact that the M305's display doesn't tilt as far back as those on some competitive models means that if you often work with your notebook on your lap at odd screen-to-keyboard ratios, you may have trouble finding a position that provides the best possible viewing experience.

Brightness is adjustable in eight steps, with the moderate power settings working fine for indoor use under normal conditions. Overall, while the M305's glossy display isn't perfect, its vibrant colors, good brightness, and minimal reflectivity all add up to a pretty impressive performance for the Satellite in this regard.

I'll say up front what may be on the minds of many: the M305's glossy keys look weird, and seem like they wouldn't be pleasant to type on.

As with the finish in general, and as we've discovered before in testing other similarly speced laptops, however, Toshiba's high-gloss keyboard proves again to be much better than expected. Key action is fairly short - a fact which some typists will undoubtedly dislike - but the keys have a quick, positive feeling when pressed. Once you adapt to the slightly slippery feel of glossy keys, the finish has a nice tactile feeling that actually works surprisingly well for rapid typing.

I did have an issue with a squeaky backspace key, and some of the larger keys (the carriage return and shift keys being the most frequently used, and thus the most obvious, offenders) didn't feel as solidly mounted as I might have liked. Still, the gloss keyboard looks great, feels both pleasant and well-constructed, and, as we've commented before, there's no concern about a matte finish rubbing off of the keys over time with heavy use.

I was a little less satisfied with the M305's touchpad experience. The pad itself is small, somewhat oddly finished (it's the only textured portion of the entire notebook), and isn't great from a sensitivity standpoint. The fact that the pad isn't recessed into the top deck or bounded by a raised border also means that I found myself frequently running "out of bounds" in trying to mouse across the screen, for instance. None of these issues even approach major concerns in my mind - more like minor annoyances at most.

With three USB ports, the M305 is playing about par for the course in terms of 14.1-inch notebooks, but the M305's USB slots do something unique to Toshiba's latest crop of laptops: with their innovative "Sleep and Charge" feature, the ports can be used to charge USB-connected devices (your iPod for instance) regardless of whether the computer is on or not - the only requirement being that the computer has to be connected to AC power. While it doesn't necessarily solve mobile charging issues (as it won't draw power when the computer's on battery), being able to use your computer as a charging station regardless of its power state is a clever idea.

The inclusion of Firewire as well as an Express Card slot will make many looking to do slightly more serious computing happy. HDMI also appears to be an option for some configurations, though the port space was blanked on our test unit. On the optical drive front, the M305 features a slim tray-loading DVD-R/CD-R combo drive featuring Labelflash on-disc image burning technology.

As on the cheaper Satellites, the M305's video out doesn't include any screw lugs. I guess Toshiba assumes that no one takes the time to actually lock down a video connection on a laptop anyone, given that these are often temporary arrangements; still, it feels a bit like scrimping to me, and as someone who regularly uses a second display with my notebook and doesn't like to worry about the video cable disconnecting itself when the computer is moved, I'm inclined to see this as a potentially noteworthy oversight for some users.

Wearing a downsized version of the Harman/Kardon branded system seen on other mid-level Toshibas, audio performance isn't bad at all with the M305. Bass response could be a little richer, and (to be picky) highs can be a little tinny through the M305's audio system, but the sound was natural at all volumes with distortion pretty impressively hard to come by. For mobile movie viewing or on-the-road audio, the Satellite is a perfectly competent performer and then some.

I had no problems with buzzing, whining, or other signal pollution either through the speakers or the headphone out.

The only particularly irritating hotspot was one that regularly developed after about 30 minutes of use under my left wrist, making me perceive the entire notebook as being hotter than it actually was. Though it runs a little warmer than some might prefer, for a smaller machine heat dissipation really isn't too bad, making the M305 relatively comfortable to use directly on your lap for light computing tasks like word processing and web surfing.

Using Vista's "Balanced" power management setting, the M305 touts right at three hours of battery life on a full charge of its 3700 mAh pack. A light run-down test involving some web browsing and general office app work at conservative screen brightness settings yielded right at 2:45 before the system warned me to plug in. Likewise, if you're willing to use reduced brightness settings and disable your Wi-Fi while watching, unless you're planning to watch all four hours of Lawrence of Arabia on battery power, you should be able to get through most DVDs in a single charge (if only just).

In short, if it's not exactly class leading, being able to reasonable expect three solid hours of computing on a charge is none too shabby for a compact notebook that comes pretty close to what could be called "budget" pricing territory.

This category's definitely a mixed bag for the Satellite, with its success as a performance notebook largely depending on your intended use. With three gigabytes of RAM and its Intel Core 2 Duo "Penryn" chipset, the M305 sports a fairly high-power processor and memory combo. The use of integrated graphics, however, serve to hamstring much of this power where gaming and other 3D graphics uses are concerned.

For the standard complement of computing tasks, up to and including working with images and light video editing, the M305 is more than fast enough. Working in Photoshop, it took a pretty involved multi-file project to overtax the M305's available RAM and several complex processes run simultaneously to noticeably outrun its processor. Assuming you're not looking for a portable gaming machine, then, the M305 proves to be fairly robust in the power department.

wPrime is a program that forces the processor to do recursive mathematical calculations, the advantage of this program is that it is multi-threaded and can use both processor cores at once, thereby giving more accurate benchmarking measurements than Super Pi.